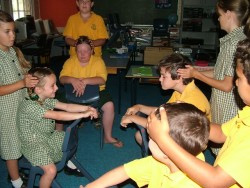 The program has been implemented in hundreds of schools throughout the world, and many of them have reported that:

The MISP benefits children in many settings: Primary schools, special schools, day care centres and pre-schools. It is also suitable for use by community/family groups and in before/after school care groups.

Some comments from teachers:

“We both think that the children start the day more settled after a massage… it’s been the best method of starting the morning.”

“At the end of six weeks the children in this class played better with each other than before and left nobody out.”

“Children who had been isolated before were included.”

“It makes you calmer and you can work a lot better.”

“When you’re giving the massage it feels like you’re doing something nice for the person.”