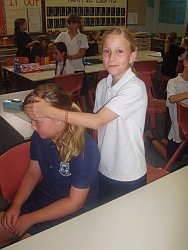 Here in Dongara we are doing the Massage In Schools Program for the 5th consecutive year. The kids are so excited when we start this program. Our Year 3 class have been doing this since kindy and they work beautifully together. The new teachers to our school are once again really impressed with the kids, the way they are so eager to participate in this program and how they readily include the new kids in the class and work with them doing the moves. For me the most rewarding time is watching boys at such a young age, asking their peers “are you okay with that?”, “that’s not too hard?”. Some of these kids have never used this sort of language and respect towards anyone before.
From the Principal
Click here to download a letter from the Principal, Janine Calver.

From an Education Assistant

I am a special needs assistant employed by Dongara DHS. We were very lucky recently to have been involved in the Massage in Schools Program.
I was amazed and delighted to find that my charge, a pre-primary student with austism, was more than happy to join the group massage sessions. Although he was not particularly interested in doing a massage he was more than happy to sit and receive a massage. I found that in these sessions he was very calm and quiet and that the calmness seemed to last for a while after the session was finished. I have also used the massage on him as a calming measure if he has become upset. I have found that once he has had a massage that he is more receptive to suggestions about changing his behaviour.
I would highly recommend this program to anyone who work with any person with autism or behavioural problems.
EJ Reynolds, Education Assistant, Dongara DHS 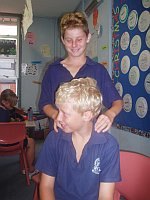 I think the massage in school programme is great. The children are learning something new and I think it gives them a bit of confidence. I also love it when they come home and want to show me what they have learnt and want to practise on me. I also think it benefits the children as in they have to massage anyone in the class.
Donna Stemm 25 July 2009
Children at Dongara District High School

As a parent I have seen the positive changes to children who have participated in this program including my own daughter who is in year 7 this year, also other children in her class especially the children who have social and/or concentration problems, and the most important thing is that the children look forward to this program. My own personal opinion is that it is a fantastic idea as we have lost the ability to show our emotions and touch people and this helps. My 12 & 14 year old daughters still hug me every day. Not many kids do this at that age! 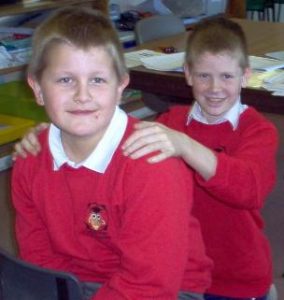 As soon as I heard about the MISP course I knew it was something I wanted to do. As soon as the first day of the course was over I knew exactly where I could utilize my new skills.

I have been a massage therapist for some time now and I have had the opportunity to work with children in my clinic. I have also been given the opportunity to work with children and their families in a respite camp environment. Having previously worked with people who have disabilities I knew this was going to make an impact to their lives. I knew the course would help the children and their families to interact on a different level and to cope with the stress of their daily lives. So armed with the skills I had learned and my enthusiasm for the MISP course I approached the camp development administrator about implementing a course into their camps that would be interactive, fun for the children and introduce the concept of touch into their lives.

When I was told the camp would like to run a trial course for a small group of high needs children I was excited and a little apprehensive. How would I implement it over two days? What changes would I have to make? Would the children (high needs) understand the concept? Would they even want to participate?

I put together a routine that I called Connecting Children and Families. It was short, interactive, and I hoped that the children would find it fun, easy to learn and the children and parents/careers would enjoy it. At the camp we started by playing some touch games (“Pizza” and “writing names”) This worked well, then the children participated in the routine. While it took a little longer for them to get the movements they still seemed to really enjoy the process and moving along with the pictures, by the end of the session I could see a change in the children. This was exciting as I felt I had really achieved what I had set out to do.

“During a camp last week for children with high needs we agreed to trial a new program. These children had varying degrees of disabilities including Cerebral Palsy, ADHD, Global Development Delay, ODD, Tourettes & Autism. Each child that participated really enjoyed their session. Some of these children come to more than one camp each year and are hoping to see Kate again next time. The children’s carers were also impressed – the carers were still talking about the calming effect on the children days later.”
Merilyn Bailey (Options & Camp Development Administrator, Camp Breakaway) 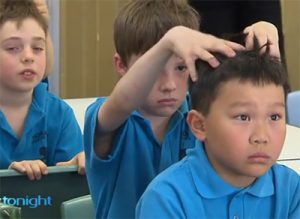 A workshop for children in vacation care at the Waikiki Family Centre was conducted by Natalie Garmson, MISP Instructor, through her business Idibidi Kids.

What did you like best about the program?
The ease of it for the children to continue on with it. We were very happy with the customer service Idibidi Kids provided.

Would you consider including the MISP as an incursion again at your centre/school in the future?
Definitely as the children really enjoyed it.

Would you recommend the program to other centres?
Yes, I would and have recommended it.